One of the things I enjoy most about my job is that I get to travel to some really interesting places. My duties include supporting 24 countries in Central and West Africa and back in April I had the chance spend a week in our office in Dakar, Senegal. While work trips are always quite busy, I try and make sure I take at least a little time to get out and see a bit of the place I am visiting. I had visited Senegal once before back in September 2001, arriving just 2 days after the World Trade Center attacks. It was an interesting time to visit for sure, and I have very fond memories of that trip. Even though this trip would be limited to Dakar, I was really looking forward to visiting again.

Upon advice from colleagues, I stayed at the Terrou-Bi Hotel, located right on its own private beach. The location is not all the central if you want to walk to restaurants and shopping, but it was much more convenient to get to the office and from what I understand, is one of the best hotels in Dakar. The grounds of the hotel are lovely and are quite nice for a short stroll. I felt comfortable enough to walk a bit outside the grounds before nightfall, though I had to wave off quite a few taxi drivers.

Terrou-Bi Hotel. On the top floor is a nice lounge where I enjoyed a sundowner in the evening while finishing my work. Breakfast is enjoyed from the bottom floor. I just loved the ocean views from here. 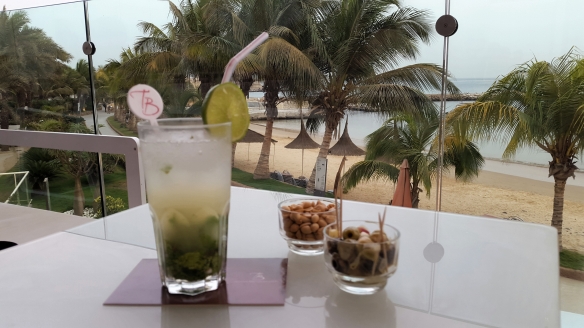 Heron in front of the Terrou-Bi

Football match. I was asked to join in but I declined saying they would surely lose if I did.

Juice of a baobab mixed with bissap (hibiscus). The manager kindly explained in great detail the best way to mix this juice. He also said it was good for tummy troubles. I didn’t have any of those but said I would try it for precautionary measures. It was really different and quite good.

There are several different restaurants at the Terrou-Bi and I ended up taking most of my dinners at their beachside restaurant which was nice but very much westernized (pizza and pasta for the vegetarians). One evening I grabbed a taxi and headed to Loutcha in the center of town. I had heard this was one of the only places in Dakar doing vegetarian senegalese style dishes and I really wanted to give it a try as I just loved the senegalese food I had on my last visit. There ended up being an entire page of veg options and I was quite pleased with my choice of veg mafé (root veggies in a thick peanut sauce with rice). 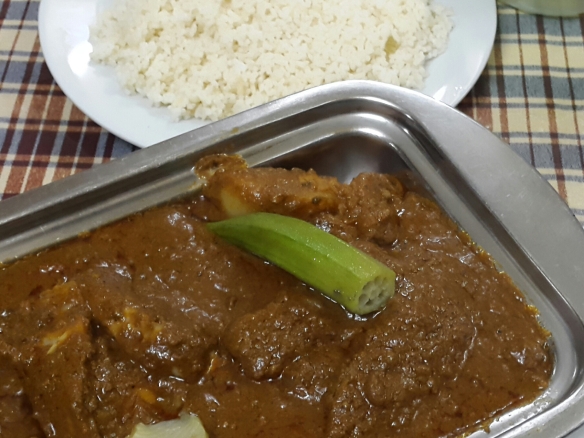 Since this was a work trip, obviously most of my time was spent working. Whenever we had a break though, I would gaze out the office windows to take in all the different sites and sounds of the city below. The call to prayer from one of many neighboring mosques, children playing outside their school, it was all fascinating. So completely different than South Africa, I really felt the old was totally intertwined with the new. Some buildings, such as my office, were fairly new and modern but many of the surrounding roads were just dirt. Horse-drawn carts mix on the roads with cars and taxis alike.

View from my office 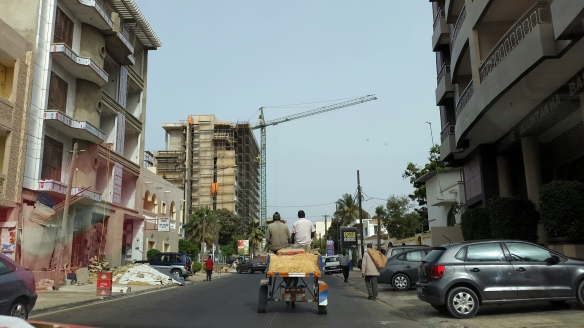 Horse-drawn cart going past my office on the right

Dakar isn’t really known for having a lot of tourist sites but my local team was eager to show off their city and I was very happy to have them show me around. A group of us piled into one of the company vehicles after work one afternoon and took a ride around the city to get a glimpse of some of the highlights.

Pirogues on the beach with the city in the background. All those people on the beach were waiting for the fishing boats to come in.

Fresh catch of the day

Just off the boats

Car rapide, a traditional form of public transport in Senegal. I was told these are old and unsafe and in the process of being phased out of the city. I just loved the colors and probably drove my driver crazy trying to take photos of them all week. Next time I am riding in one.

Somewhere in the city center. Things were much less modern here.

This was at a Car Rapide station, they were everywhere here.

Maison des Esclaves (Slave House). We did not have time to visit the now museum, but I did on my previous visit and it was deeply moving. I only got a bad photo of it, highly zoomed-in from afar. As it is such an important site, I wanted to include it in my post so I added some filters to it to try and give it an artistic look (not that it really worked).

Le Monument de la Renaissance Africaine, at 49 metres tall it is the tallest statue in Africa. It sits atop a hill and can be seen from various spots in the city, including my office.

And that was my trip to Dakar. Next time I go back I hope to spend some time traveling a bit around Senegal to experience more of this beautiful country. Thanks to all of my colleagues for a terrific week, hope to see you soon.

3 thoughts on “Dakar: A Working Visit”